The sub-compact SUV segment has become one of the most popular segments in a very short time. While none of the cars competing in this segment come with proper off-road equipment and features, every manufacturer tries to provide something of the sort.

There are about 8 vehicles competing in this segment in total with the Nissan Magnite being the cheapest one. Tata cars however are known for their sturdy build quality and impressive GNCAP ratings.

Here we have video that shows how a vlogger has pushed Tata Nexon to its limits by driving it on really rough roads in the Himalayas.

The video has been uploaded by Ridiculously Amazing on their youtube channel. The video starts by showing Nexon being driven through rough roads of Himalayas.

The driver is seen driving the Nexon through narrow mountain roads with no tarmac on it. The whole place is filled with dust and sand.

The Tata Nexon not being too wide, also passes easily through the narrow off-roads. The blinding hairpin turns and sheer height of the roads make one wonder. The skill and speed of the driver comes in too.

The video even shows a section where he is driving through a river bed with huge stones. The driver carefully drives the car through those sections without getting stuck and hitting the bottom. Nexon was definitely struggling at places as it is not meant to do such hardcore stuff. It is made for city and highway commute and handle some rough roads within city limits and around.

The Nexon is also available with an electric powertrain. In fact, the Nexon EV is the best-selling electric car in India, having clocked sales of 2,200 units in just 10 months of launch. 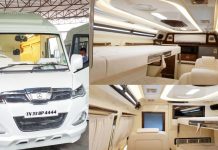