The cultural hub of Kannur, located in Malabar region of North Kerala, became the fourth city in the state to have its own international airport. The fruition of a commercial airport came after nearly two decades of efforts to build one following massive public interest. The airport will serve the people of Kannur and Kasaragod districts of Kerala and Kodagu region in Karnataka.

However, many wouldn’t know this but the town of Kannur was witness to historic flight landings even before India attained Independence. In 1935, historical evidence points to Tata Airlines, India’s first private airline, having touched down at Kannur, then a garrison town under the British, on it’s way to Thiruvananthapuram.

The weekly service was introduced at the request of the then king of Travancore, Chithira Thirunal Bala Rama Varma. In fact, a journey map of the airline shows service was routed from Bombay to Goa, touching down at Kannur possibly for re-fuelling before it made its way to Thiruvananthapuram. Kannur then had an airstrip at the ‘Kotta Maidanam’, used by the British officers. Read in Malayalam.

The price of a ticket from Bombay to Kannur was Rs 135 then and Rs 150 for Bombay to Trivandrum. A one-way ticket from Kannur to Thiruvananthapuram was priced at Rs 60 those days. A DH83 Foxmoth aircraft was used for the service. Besides the pilot, the aircraft could seat four persons.

The historic occasion of the flight landings at Kannur has been fleetingly captured in the memoirs of late Captain CP Krishan Nair, the veteran hotelier who formed the renowned Leela Group. In his book ‘Krishna Leela’, Nair writes, “I think it was in 1935 that JRD Tata’s airline landed in Kannur while on it’s way from Bombay to Thiruvananthapuram. The people of the younger generation wouldn’t know this. The plane would land at the famous Kotta Maidanam. 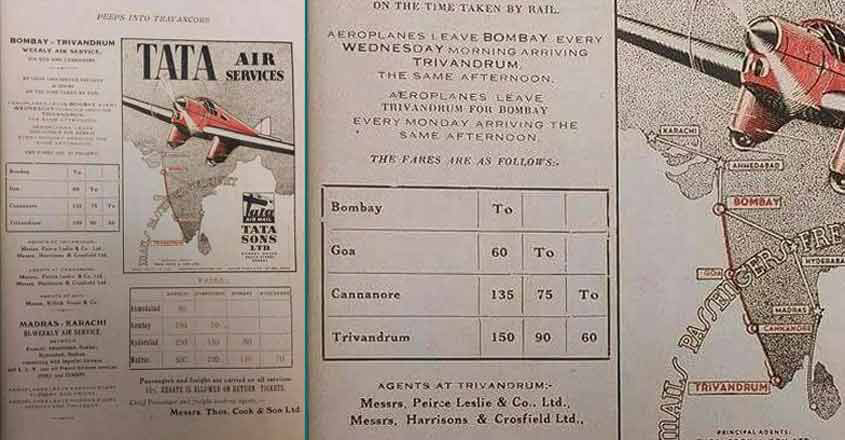 As kids, we would all go to see the flight as if we were going to a festival. It was a wonder for us. Those moments are still fresh in my mind. The ‘pushpakavimanam’ that we heard of in the epics was finally here in Kannur. As kids, we wanted to touch its wings. But there would be sturdy security personnel so it wouldn’t be possible. At night, I would dream of wearing a suit and coat and riding in a plane. I remember seeing that dream for many nights”.

In fact, Captain Nair, who passed away in Bombay in 2014, had persevered a lot for an airport in his hometown of Kannur. His contributions were mentioned in Chief Minister Pinarayi Vijayan’s address during the present airport’s inauguration.