A deadly game of Indian teenagers in front of a train

This is the terrifying moment a group of Indian teenagers narrowly avoided being killed while playing a deadly game of chicken on a railway line.

The group were spotted running out in front of a large passenger train on the tracks of the Daliganj Railway Bridge in Lucknow, Uttar Pradesh.

As the speeding train closes in, the teenagers run along the tracks – each waiting until the last possible moment to leap off the open-sided bridge into the roaring waters of the River Gomti below.

The teenagers gather on the bridge every day at noon, as temperatures soar to an unbearable 45C.

Standing on the tracks, often with the trains only metres away, their terrifying game of chicken involves competing to be last person to leap from the bridge into the refreshing water below.

Along with the challenges posed by the sweltering heat, fast moving trains and deep waters, the teens also have to try and evade local law enforcement.

‘We do this every summer. This is a great way of having fun. Otherwise, going about normally around the river is very boring,’ 18-year-old Mukesh Kumar, the first to jump from the bridge, said.

‘We also have bets sometimes about who jumps last and waits for the train to come nearest,’ he added.

Police officers have a tough time manning the tracks and stopping teenagers diving off the bridge.

‘The police come once in a while, but once we have jumped off, they cannot chase us. We outrun them every time,’ Varun Jadav, a teenager who frequents the spot, said.

‘Also, it is so hot at that time of the day that even the railway track is boiling hot. So when we are here that no one comes around this spot,’ he added.

Despite the dangerous nature of the act, the young men are adamant that none of them have ever been hurt playing on the tracks.

‘We do this a lot, so there is no question of getting injured or anything,’ Kumar said. 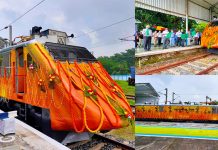 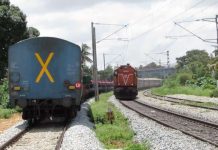