The trial run of world’s first Transit Elevated Bus (TEB) or “straddling bus”, which plies above road and allows cars to move beneath it, has caught the attention of Prime Minister Narendra Modi.

He has asked the road transport ministry to get maximum details and explore whether such buses can be of use on highly congested roads in Indian cities.

According to media reports, the first trial run of TEB in Qinhuangdao in north China on August 3 was successful. Reports suggest that the 22-metre-long TEB is like a light-rail train that extends across two lanes and runs on electricity.

Sources said while the advantage of such a bus to carry 300-1200 passengers can address the need of an efficient mass transport system in Indian cities, it has the added benefit of being a non-polluting vehicle. However, one concern is that such buses fit into stretches that are relatively Brazil and Indonesia too have reportedly shown interest in this bus system.

Modi was instrumental in the introduction of hydraulic pressure machines for tree-transplantation in Gujarat when he was the chief minister. Sources said that he had watched the machine in a documentary and had asked the forest department to see if it could be of use. Subsequently, the machines were imported from Canada. 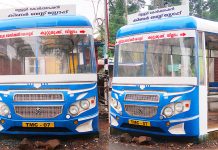