Serial Numbers Given For KSRTC Buses

We were getting a tremendous number of requests from our readers to publish an article about the serial numbers aka serial codes (Bus codes) given for Kerala State Road Transport Corporation buses. So here i am publishing this article to all who are unaware about this series codes or bus codes.

We all know that, In Kerala, the number series KL 15 is reserved for the Kerala State Road Transport Corporation (KSRTC) buses. For eg. KL 15 7966 is an Ashok Leyland KSRTC bus with vehicle code RAK-786.

So lets start with the history of bus code. The bus code is making from the word “TRANSPORT”. Earlier, during 70’s the bus codes started like giving single letters T, R, A, N, S and P. Every series contains 1,000 number of buses.

There is an other single digit code. which is “D” given for the depot vans of KSRTC. Later, the combination of two letters along with the first letter, ‘T’ has started.

Along with this series, during the period of 1994-1999, Almost 144 buses came to the fleet of KSRTC from their own Edappal Regional Workshop and body building unit with a special bus code ‘TE‘.

And there are few “Tanker” lorries for KSRTC with a special series “TT” We had TT-1 to 10, when KSRTC was having the Tractor Trailers (Tractor by AL and Trailers by Hyderabad Allwayn) 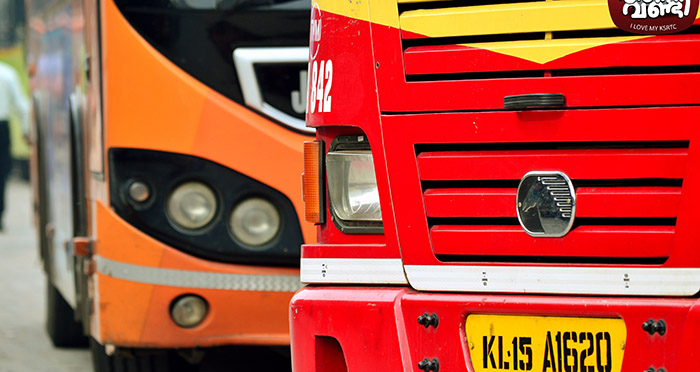 Later, in 2006, ‘RR‘ series buses were introduced. In that RR 1 to RR 54 are outsourced buses. Then KSRTC has started building bus body in their own Central and Regional Workshops. KSRTC is having one Central workshop, which is situated at Pappanamkode in Thiruvananthapuram and 4 regional workshops in Mavelikkara, Aluva, Edappal and Kozhikkode.

55th bus in RR series was ‘RRK 55’, body built by Kozhikkode Regional Workshop Of KSRTC. So they have added an additional letter to the series to mention the code of workshop. The codes given for the workshop are

These buses are now converted to Super Fast buses.

RA 100, RA 101 and RA 102 was our volvo buses which was running from Thiruvananthapuram to Bangalore.

RN 777 is the one and only Vestibule bus of KSRTC

At Present AT series is going on.

Volvo Multi Axle Buses are given the serial numbers with RS.

Buses introduced under the scheme of JnNURM is denoted by a special series “JN”
JnNURM buses in Ernakulam : JNK
JnNURM Buses in Thiruvananthapuram: JNT

Future series will be like AR, AA, AN, AS and AP. We hope you got the trick.