A pregnant woman who was living in a house on the banks of a river in Kerala’s flood-hit Attappadi district was carried across the river in a rope by rescue personnel today.

In a video, the pregnant woman is seen holding on to a rope as she is pulled towards safety, her body fasted to a hanging belt suspended over the strong currents of the muddy Bhavani river below.

The eight-month pregnant woman, Lavanya, lives with her husband and their one-and-a-half year old child in the house now under floodwaters.

She said her husband had also undergone a surgery for an illness recently.

Rescuers of the Kerala Fire Force and the state police pulled her towards the other side of the river, from where she was sent to a hospital for a medical check-up.

Videos of dramatic rescue have been coming out of Kerala, as rescue personnel from the military, the state administration and the National Disaster Response Force (NDRF) fanned out across the southern state to save people from rising floodwaters.

A newborn was rescued by the Army today morning. In visuals, a soldier is seen holding the baby wrapped in waterproof cloth, while another puts an umbrella over them.

At least 42 people have died in the floods in Kerala since Thursday. Chief Minister Pinarayi Vijayan has been meeting with officials of the State Disaster Management Authority at their control room to oversee coordination of relief and rescue operations every day, and briefing the media twice a day. 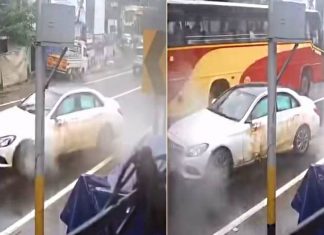