A Pakistan International Airlines Airbus A320 has crashed near Karachi Airport, Pakistan, while operating a domestic service as flight 8303 from Lahore. So far the airline has reported that there were 91 passengers and seven crew members onboard the aircraft that went down in a residential area to the southeast of the airport.

Rescue efforts are now underway to locate any survivors from the aircraft, as well as any victims on the ground at the place of impact. The aircraft registered as AP-BLD was 15-years-old joined the airline in 2014 after being flown by China Eastern Airlines.

A statement released by the airline following the crash said: “We deeply regret to announce that a PIA flight PK 8303 from Lahore to Karachi crashed near Karachi Airport. No further details of the accident are available at the moment. 91 passengers and seven crew members were on board.”

The crew of PK 8303 had aborted the approach following technical problems with the extension of the nose landing gear. While repositioning for another approach the crew declared a MAYDAY before losing height and impacting the residential area of Model Colony.

The pilot of the Airbus A320 airliner made a mayday call saying he was experiencing technical problems, Khan told CNN.

“He had been told both landing strips were available for his use but he preferred to use the go-around landing route, we are looking into the technical issue. Our prayers for the lives that have been lost,” Khan said.

An emergency response protocol has been activated, he added.

Footage posted from the scene on social media showed flames, plumes of smoke and a street filled with rubble in what appears to be a built-up area.

Pakistan’s civil aviation authority allowed limited domestic air travel to resume Saturday after a two-month suspension imposed as part of efforts to contain the spread of the coronavirus.

International flights are not expected to resume until June 1. Pakistan started a phased reopening of its nationwide Covid-19 lockdown on May 9. 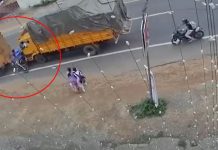