Getting a new car is such a happy occasion for any family, it is, after all, a prized possession for everyone. However, the excitement can be too much to contain sometimes and the aftermath is not pleasant.

In a recent incident, a newly bought Volkswagen Polo toppled and crashed right outside the showroom gate after the driver lost control of the car. A video has been shared online which shows the CCTV footage in which the car is seen badly toppling over right after its taken out from the showroom.

It is unclear from where the footage is taken from but looks like somewhere in south India. Mumbai Boy Survives Unhurt After Car Runs Over Him, Lady Driver Arrested After Video Goes Viral!

Due to the coronavirus lockdown, a lot of car showrooms were also shut. The auto dealership showrooms have begun very recently. A family who got a new VW Polo right after may have to put their dreams on hold for a moment.

As the video shows how badly their newly bought car crashed within minutes of taking the keys. A white coloured VW Polo was just handed over to the owner. The car had a newly adorned garland showing the family had also performed the ritual of puja of their new possession.

But within a few moments, as the owner took it out to ride, excitement got a better hold of him or either he was inexperienced with the new car. The vehicle crashed on to the gate and toppled over. 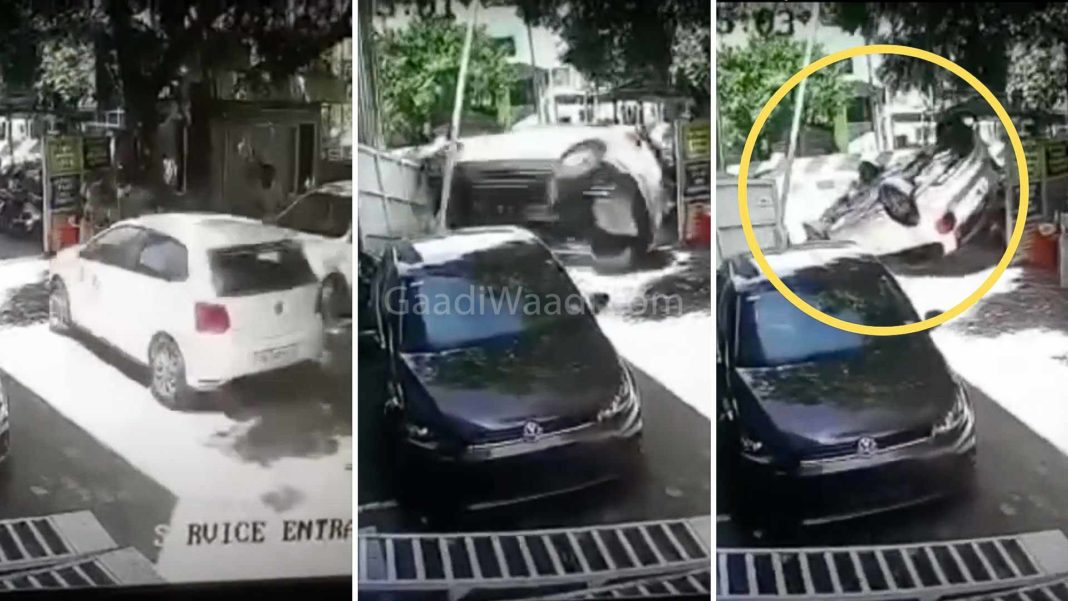 As you can see, the car badly toppled over upside down just at the gate of the showroom. Staff members are seen rushing towards the gate to help. Although it is not clear if the driver was injured in the accident, the car would be severely damaged.

This reminds us of another similar incident from Himachal Pradesh last year. A woman drove a car inside the Hyundai showroom and accidentally rammed it out through the glass pane.

The car went out and crashed into other parked cars right outside. So it is always important to have a trained driver or someone who knows how to drive properly whenever one heads for a new purchase.