Volvo Buses has given first locally assembled UD buses to Bangalore Metropolitan Transport Corporation (BMTC) for trial runs. The semi-low floor, 12-metre-long, Euro IV 230hp 8-litre diesel-engined buses are also equipped with a rearview camera and other facilities required for a public transport system. On June 20, Akash Passey, senior vice-president, Volvo Buses, handed over two UD buses to BMTC. He said the company is targeting the value segment with its UD buses, which are assembled at Volvo’s bus production plant in Hoskote on the outskirts of Bangalore. 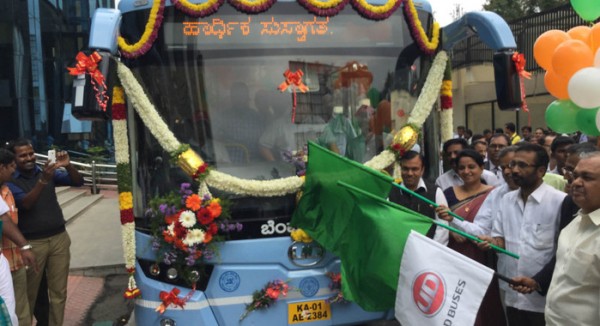 This plant has a manufacturing capacity of 1,500 units and will produce UD buses along with Volvo’s existing premium buses. The company, which will consider adding another assembly line to manufacture UD buses in its production plant, says the price of the buses will be 30-40% lesser than its premium buses. Passey said the company will detail the mass production, price, plant capacity and localisation levels of UD buses after a month.

R Ramalinga Reddy, minister for transport, Karnataka, flagged off the buses along with BMTC managing director Dr Ekroop Caur. According to Caur, Volvo has a long association with BMTC, which has around 700 Volvo buses in its fleet. She said the transport corporation has taken the two UD buses on a trial basis and it would decide on buying the vehicles only after testing their performance across various parameters.

BMTC, which was the first to introduce Volvo buses in its fleet in India, is one of the largest STUs in the country with a fleet of 6,473 buses operating 79,000 trips every day. Its fleet includes medium segment buses from Ashok Leyland and Tata Motors. In March 2014, Volvo had announced plans to launch its economically priced UD buses in the upper medium bus segment in India, made in India through its partnership with SMK Auto, a part of the Prakash Road Lines Group in which Volvo Group has a 15 percent stake.

The Volvo Group acquired the Japan-based UD bus brand in 2007. While the Group has been restructuring the brand and commencing production in India, there are plans to export these buses to other emerging markets from India.